Želimir Žilnik and the Black Wave 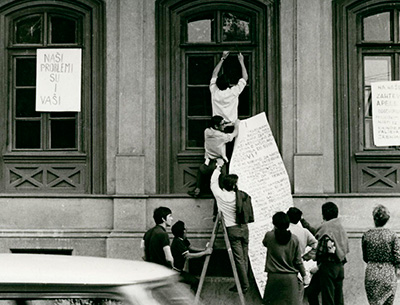 Actively engaged in making politically incendiary films for over 50 years, Serbian filmmaker Želimir Žilnik (b. 1942) was a pioneering member of the radical Yugoslav “Black Wave” who, in 1971, read from the stage a manifesto entitled "This Festival Is a Cemetery" on the opening night of his stunning short, Black Film. Žilnik spoke about the worthlessness of abstract humanism, the exploitation of poverty and the “alleged bravery and socially conscious filmmaking which just represents the ruling fashion of bourgeois cinema.” No other film director in Serbia has remained committed to the idea of socially provocative and politically engaged filmmaking as persistently and as permanently as Žilnik.

Žilnik was born in a Nazi concentration camp in Nis, in what was previously called the Socialist Federal Republic of Yugoslavia, to politically active parents. After Žilnik’s mother was executed, Želimir was released and raised by his grandparents. His father, a Slovene communist activist, was eventually captured and executed by the Chetniks. Thus Žilnik’s fierce determination and political awareness springs from a deep-seated place, manifesting into a life dedicated to documenting complex social situations through both filmmaking and practicing law.

The Black Wave—which included Želimir Žilnik and Dušan Makavejev—were a group of filmmakers in Yugoslavia in the 60s influenced by Italian neorealism, the French New Wave, and other similarly minded eastern European filmmakers. Žilnik in particular was greatly affected by Agnes Varda’s Happiness [Le bonheur, 1965], which he maintains is an endless source of inspiration. Reaching its height in 1967 – 1968, the Black Wave was united by a belief in the freedom of artistic expression and the desire to reform the cinematic language. Filmmakers fought for the right to depict the darker side of humanity and to openly criticize the policy of the socialist state. The Yugoslav government violently cracked down following the riots of 1968, and many filmmakers, including Žilnik, were prevented from making films and forced to leave in exile.

Renowned for his use of non actors and blending of documentary with fiction filmmaking in a kind of “docudrama,” Žilnik remains steadfast in his dedication over the past fifty years to making films that represent people on the edge of non existence, those who the 1960s communist Yugoslavian government would not officially recognize. The unemployed were featured in The Unemployed, neglected children were the focus of Little Pioneers, and Žilnik masterfully documents and presents a very taboo acknowledgement of the homeless in his work Black Film of 1971.

Žilnik’s long and illustrious filmmaking career can be roughly divided into at least four distinct periods, almost echoing the number of distinct political changes in Serbia-Yugoslavia over the same time period. In the 1960s , Žilnik focused on social- political documentaries, youth culture, communism and the many resistance movements. Incensed by Žilnik’s anarchic Early Works, the government violently suppressed both his second feature film and the entire Black Wave. Žilnik fled Yugoslavia, thus beginning his second period in West Germany. However, his exile was short lived, since his radical productions were also censored in that country, and he was forced to head back home. During Žilnik’s third period, he embraced television and the freedom to make projects that reach the masses. This was a prolific period for Žilnik; from 1977 to 1990, he made eleven movies for television, two features, a mini series and a number of shorts. It was also during this time that Žilnik conceived of a new genre of film, the documentary drama. Žilnik empowered people from the fringes of society—street children, the unemployed, workers, homeless people, foreign workers, transvestites, illegal immigrants—in the creative process of filmmaking by constructing films around their individual stories. Working swiftly in television, he was able to immediately document political upheaval in works like the ethnographic melodrama Brooklyn—Gusinje, commissioned by Belgrade TV, set in a small village in Montenegro at the Yugoslav-Albanian border.

Žilnik’s storied life and filmography is ultimately one not easily defined or summarized, but it is full of determination, energy and appreciation of life. From the very beginning, Žilnik has focused on the relationship between ideology and society, and he came to fashion the clearest mirror of the social system by simply having his protagonists play themselves. – Jeremy Rossen